Robert Waln Ryerss was born on March 8, 1831 and would be the only child of Joseph and Susan Ryerss. Susan passed away soon after Robert’s birth and Joseph married her younger sister, Anne, who played an important role in raising Robert. Joseph was a partner in the firm of Ryerss and Lincoln, a major import/export business and later became President of the Tioga Railroad Company.  Robert was a practicing attorney in Philadelphia County, served as a Director of the Tioga Railroad Company of which his father was President. Robert was instrumental in the creation of the Pennsylvania Society for the Prevention of Cruelty to Animals, (P.S.P.C.A.), and in 1883, the Anti-Vivisectionist Society of Pennsylvania. The Ryerss family maintained a residence in Philadelphia proper but after building “Burholme” near the Fox Chase neighborhood and following Joseph’s death, Anne and Robert spent much of their time at Burholme while maintaining a home on Walnut Street in the city.. Anne became noted as an animal rights activist and was known to bring abused and sick horses to Burholme to care for from the streets of Philadelphia. Mary Ann Reed arrived in America at the age of 21 and was hired by Anne Ryerss as her head housekeeper. Reed and Robert Ryerss developed a close relationship, he being 17 years older. There isn’t any information on the nature of the relationship but what is known after Ann Ryerss died, Robert married Mary Ann Reed. Robert Ryerss died six months after marrying Maryann Reed. Mary Ann married the Rev. John Baun in 1899 and the Baun’s traveled the world bringing back items to Burholme and insuring Ryerss will was carried out.

The legacy begins with Joseph Ryerss, a wealthy merchant and railroad man who upon his death left a healthy estate to his wife and son. It is from the wealth of Joseph Ryerss that the legacy began. Anne Waln Ryerss was committed to the

proper treatment of animals and in specific horses. Anne has been described as a feisty petite woman who made a practice of stopping the owner of a horse who was mistreated and persuade the owner that the horse was in distress and would benefit from a rehabilitation period at her farm in Burholme. In some cases the horses were restored to good health and in others some did not recover enough to work again and remained in the peaceful setting of Burholme under the care of the Ryerss for the rest of their lives. Of note is that Anne was following a family tradition concerning their action regarding the humane treatment of animals in that in 1866 Morris Waln donated $10,000 to establish the Pennsylvania SPCA.

Upon her death, Anne Waln Ryerss left $30,000 to establish a farm to take care of ill and abused animals with another $40,000 dollars for its maintenance. In 1888 Robert W. Ryerss purchased 80 acres of land at what then Krewstown and Meetinghouse Roads in the Bustleton section of Philadelphia. Ryerss would serve as President of the Board of Directors of the farm until 1895. The objectives of the farm were set forth in its constitution.

The farm began operations in June of 1889.  The farm struggled somewhat with finances and at one point in time mortgaged the Krewstown farm and moved its operations to Chester County only to return to Krewstown when the farmer defaulted on the mortgage. Upon the farms relocation back to Krewstown thirty acres of the farm were sold to the City of Philadelphia for $18,355.50 and are now part of the Pennypack Park System. The farm continued operation at Krewstown until May of 1956 when the Board of Directors sold the farm to a developer for $441,550.  The farm relocated and continues operation to this day now known as The Ryerss Farm for Aged Equines, at 1710 Ridge Road in Pottsville Pennsylvania. (http://ryerssfarm.org/ ). 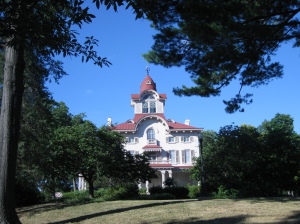 Ryerss Museum and Library atop the hill at Burholme Park- Philadelphia, Pa

Robert Waln Ryerss married Mary Ann Reed six months prior to his death. Mary Ann was the family maid at Burholme and maintained a close relationship with the Ryerss family. Upon his death it fell to Mary Ann to carry on the legacy of Robert W. Ryerss.

The adjudication of the will of the late Robert W. Ryerss was presented in orphans court on Saturday May 15. Among the bequests are $5000 each to The House of St. Michael and All Angel’s for Crippled Colored Children, The Home for Destitute Colored Children, and The City Mission. $30,000 for the erection of a church at Rockledge. His large estate is to be equally divided between his wife, the Society for the Prevention of Cruelty to Animals, the Corporation of the church at Rockledge, and the City of Philadelphia, the last to be used to maintain part of his estate as a public library and park. 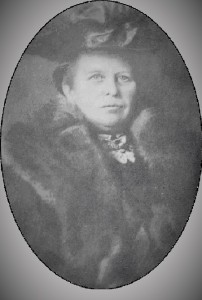 It fell upon Mary Ann Reed-Ryerss to carry out the wishes of her deceased husband. It is apparent she did so with much enthusiasm. In 1899 she married an Episcopal minister, Rev. John Baun, (also at times spelled Bawn.) The couple traveled the world bringing back museum pieces to Burholme. An addition was added to Burholme and houses two galleries for public view.

The first floor gallery contains pieces collected by Mary Ann on her travels abroad. There are items from India, China, and the Middle East in the gallery. She added the pieces to the collection following Robert Ryerss desire to provide art to the community at large.  Located adjacent to the first floor gallery is the family home and on display here are various artifacts from the 1800’s that the family maintained. Although not all of the pieces are genuine to the house, this gallery reflects the life style the Ryerss maintained. 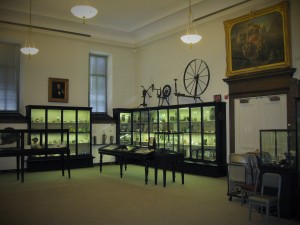 The second floor gallery is a collection of eclectic items brought back to Burholme by Robert Ryerss and Mary Ann. In addition there are several paintings in the gallery of great interest to include paintings of the family pets and horses, the Waln family and a large painting of “Cortez taking Prisoner Montezuma” by R.H. Schnider painted in 1856. This piece is displayed above the doorway to the 2nd floor gallery. 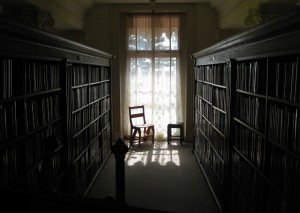 The Library at Ryerss Museum

The library at Ryerss is an active lending library. The library maintains a collection of classics but also has new publications available. The library is managed by the Fairmount Park Commission. Those wanting to tour the museum and library can start here as staff members are available on Friday, Saturday and Sunday from 10 a.m. to 4 p.m. to escort tours through the museum and library. In addition to books, the library contains numerous pieces of brass and marble dust sculptures and paintings.

Burholme Park is named after Ryerss house that sits atop the park. Located at Central and Cottman Avenues in Philadelphia the park is a major part of life in Northeast Philadelphia. Athletic fields are used by various youth athletic organizations for baseball, football, and soccer.

Adult athletic groups also utilize the playing fields. The picnic areas and pavilions just at the bottom of the Buholme hill and those to the west of the Museum are heavily used in the warm weather months. The playground area is a popular spot for children and parents in the neighborhood and beyond. The hill at Burholme has been rated at the number one sled hill in the city of Philadelphia.

Also part of the park are the West Woodlands, the land donated separately to the city by Mary Ann Reed Ryerss-Bawn. The West Woodlands contains trails for hikers, a small brook in the valley of the woodlands and various types of wildlife for nature lovers.

Robert Waln Ryerss was a member of Trinity Church Oxford and saw a need for a church in the Fox Chase/Rockledge area. In 1893 Ryerss established a mission in Rockledge. Following his death, Mary Ann Ryerss oversaw the building of the Memorial Church of the Nativity in Rockledge. The original mission, was moved to the rear of the property on greased timbers and pulled to its present location by mules. Construction of the new church was completed in 1898. The church was

Altar at Memorial Church of the Nativity

designed after St. Mary’s Cathedral in St Neot’s Huntingdonshire England. The Church of the Nativity remains an active and important part of the Fox Chase/ Rockledge community with an active congregation and community outreach. 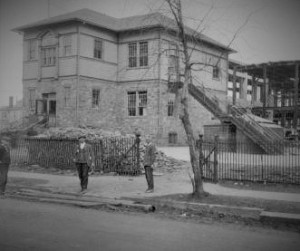 The Robert W. Ryerss School, a two story building,  was built in 1900 at Bleigh & Palmetto Street in the Five Points, (now known as Burholme.) The school operated as  a private school unti  1914 when taken over by the Philadelphia School District. Shortly after the takeover the Ryerss School was replaced by the larger Kennedy Crossan School at the same location.

The Robert W. Ryerss Ward for Violent Male Patients .The ward was part of The Lebanon Hospital located in Syria. Funds for building were provided by Mary Ann Reed Ryerss-Bawn to build and staff the new ward. The Lebanon Hospital operated until the mid 1980’s when it was closed.

RobeWaln Ryerss  carried out the legacy of his Step-Mother, Anne Waln Ryerss in the establishment of the Ryerss Farm for Dumb Animals. It was left to the family maid upon Robert’s death to secure the family legacy. Mary Ann Reed Ryerss-Bawn insured the Ryerss legacy continued through fulfillment of  Robert’s Will. She established a legacy of caring for the mentally/physically disabled, humane treatment of animals, immersion in faith, provided art and books to the general public, provided a vast park for the community. This is the legacy of Ryerss as completed by Mary Ann Reed Ryerss-Bawn. The Friends of Ryerss, a community group focusing on Ryerss Museum and Library carries on the tradition of Ryerss-Bawn. ( https://www.facebook.com/pages/Friends-of-Ryerss-Museum-and-Library/133015956726859 )

Report of the Director – The Lebanon Hospital- Syria

All photographs by g emil reutter except where noted.

-g emil reutter lives and writes in the Fox Chase neighborhood of Philadelphia, Pa. He can be found at: https://gereutter.wordpress.com/about/ .