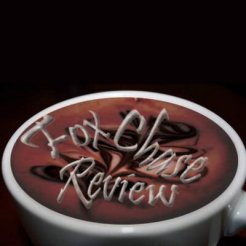 Our blog has been widely read, full of  book reviews, essays, poetry and literary news, interviews of poets and writers as well as area news. . We thank all those who contributed to the blog. The main focus of the review, reading series and blog has always been to promote poets and writers and we believe we have achieved this goal.

We now look forward to new challenges and goals, using more of our time to create and explore the craft.

To view past issues of The Fox Chase Review please click on the links under the Masthead.

Thanks to all the poets and writers who contributed, the great editorial staff, and occasional hosts of the readings series who kept FCR going. 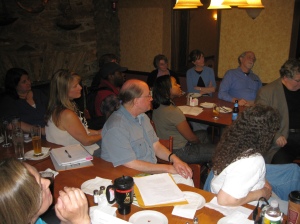 Poets In The Park – Lions Park

Poets on the Porch @ Ryerss Museum and Library

We leave you with these wise words for all poets and writers to follow:

“Be what you are. Give what is yours to give. Have style. Dare.” – Stanley Kunitz

Looking Back in Photographs- Moving Forward

As we move forward with The Fox Chase Reading Series in 2012 we thought we could take the time to look back over the last five years in photographs. We hope you enjoy the view. 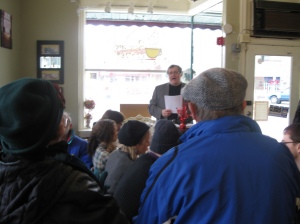 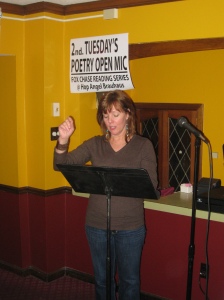 Featured Poets and Writers Series at Ryerss Museum and Library 2012-

There was a glow in the cafe 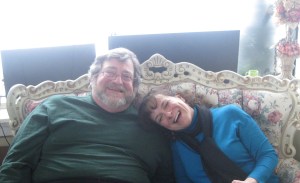 Everyone enjoyed the poetry and prose of April Lindner and Noah Cutler.

April Lindner is the author of Jane, a novel from Little, Brown’s Poppy released in October 2010. Her poetry collection, Skin, received the 2002 Walt McDonald first book poetry prize from Texas Tech University Press. With R. S. Gwynn, she co-edited Contemporary American Poetry, an anthology in Longman’s Penguin Academics series. She is an Associate Professor at Saint Joseph’s University in Philadelphia. You can read the poetry of April Lindner in The Fox Chase Review at this link: 2010 AW

Noah Cutler is a retired real estate lawyer living in St. Davids, Pennsylvania. He enjoys writing essays and novels, as well as writing and performing his poetry. Short stories are a very recent genre for him, and he is excited about the new adventures it is providing. You can read the prose of Noah Cutler in The Fox Chase Review at this link: 2010 SU

The FCR continues to expand its readership and the grade of excellence of its published poets and writers. We have been faithful to our mission in providing our readers with a mixture of poetic voices under the guidance of our Poetry Editor, Diane Sahms-Guarnieri.  In 2010, we published three editions and remain committed to releasing three editions a year.  Our expanded fiction section has been well received and we will continue to expand under the guidance of our Fiction Editor, O.L. Barnes.

The FCR focuses on the literary promotion of our published poets and writers.  Our Web Designer, SR Moser, has developed a sleek format to facilitate this endeavor by taking our readers straight to our writers’ work, without the bells and whistles that distract from the literary content.   January 2011 will mark the release of our ninth edition.

This is the third year that The FCR has nominated poets/writers for The Pushcart.  We hope to crack this ceiling with an award sometime in the future. In addition, we are researching other avenues to promote the poets and writers that we publish. This year has marked a change in our submission policy.  Poets and writers can query The FCR and request an invitation to submit.  We look forward to 2011.

You can find out who is reading at our venues by visiting the ninth edition of The Fox Chase Review that will be released in January 2011 and by visiting our blog at this link: Fox Chase Reading Series 2011 Schedule

The Fox Chase Reading Series Blog was originally created to compliment The Fox Chase Review and The Fox Chase Reading Series. In 2010 we were able to expand to book reviews by our staff, Diane Sahms- Guarnieri, Rodger Lowenthal, Alfred Hayes and Charles Loudon. In addition, we promote books that come to our attention by poets/writers who are published in FCR and highlight literary links of interest.  2010 marked the departure of Charles Loudon who moved on to other adventures.  If you have a review you believe the FCRS blog would have an interest in please submit it to foxchasereadingseries@yahoo.com for consideration.

ON THE HOME FRONT

g emil reutter had his eighth release, Carvings, published in November 2010 and we have created a blog in support of the release. For information on Carvings please visit: http://gereutter.wordpress.com/

Diane Sahms-Guarnieri , our poetry editor, will release Images of Being, a full-length poetry collection in October 2011. We will keep you updated.

SR Moser continues to write, garden in the pacific northwest while exploring her art of photography.

Rodger Lowenthal continues to publish book reviews and poetry in the small press. Rodger is looking forward to finding a home for his manuscript in 2011.

Alfred Hayes has fled the winter months in Burholme and is traveling throughout the southwest on his Harley, where he will visit with Charles Loudon in New Mexico. We look forward to his return, unless Charles keeps him out west!

Ron Silliman has named us The Fox Chase Collective. Truly, that is what we are. A collective dedicated to the promotion of the written word on- line and the spoken word in performance.  The road has been bumpy and full of surprises. We wish the venues that support our reading series great success in 2011.  We hope our readers of The Fox Chase Review continue to enjoy the poets and writers that we bring to them.   Special thanks to Frank Wilson – The Books Inq. Blog; Ron Silliman; Anthony Buccino – The New Jersey Poetry Blog;  Nathalie Anderson –promoter of  literary events in Southeastern Pennsylvania;  local newspapers and various websites for including a number of FCR and  FCRS events on their blogs and announcements.

We have grown over the last three years and look forward to continued growth in 2011.

Klein and Worrell close out 2010 Season

We wish everyone a beautiful December. The ninth edition of The Fox Chase Review will be released the first week of January  and we will return for our first event of 2011, 2nd Tuesdays Poetry Open Mic, 7:30pm on January 11th– Hop Angel Bruahaus, 7980 Oxford Avenue, Philadelphia, Pa. 19111.

Mckee and Lee Heat Up in Fox Chase 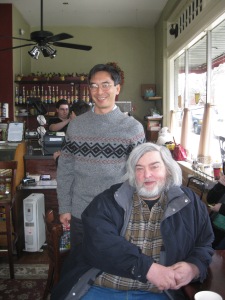 Winter has arrived early in Fox Chase with temperatures dipping below freezing tonight. Lou McKee and Jeff Lee warmed the crowd at 3 Sisters Corner Café at the Featured Poets Series with their poetic stylings offering a relaxing atmosphere following Black Friday. These fine poets were followed by an outstanding open mic. To view photos of the event please visit: http://www.flickr.com/photos/12065560@N04/sets/72157614581079088/

You can learn more about our featured poets on November 27th by visiting their websites:

Hanoch Guy and Mike Cohen fell into Fox Chase this afternoon showering the coffee shop with words as leaves of green, gold and red floated through the air. Cohen and Guy were joined in the open by Barbara Terode, Rodger Lowenthal, Bernedette McBride, B.E. Kahn and Bill Conrad.