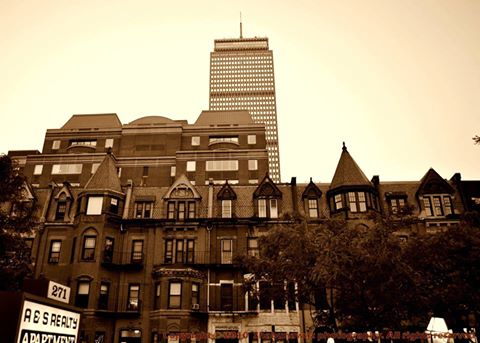 I lived in a room on the top floor (38/week), bathroom down the hall, a stairway to the roof, cockroaches–above Davio’s Rest. I remember I worked at the “Fatted Calf” in Copley Square as a short order cook, and sold the Globe over the phone in Cambridge. Used to frequent the Exeter Theatre down the block– Marx Brothers, Rocky Horror–chanting at midnight–ate at Guild’s drugstore across from the Lenox Hotel, Ethel, the counterman, continuous narrative of her rotten kids at the Old Colony project in Southie… I also was an asst. manager at Big L Discount Stores for a stint– health and beauty aids–can you believe it?…taught in the South End at Dr. Solomon Carter Mental Health Center–DYS and DSS Kids… field trips to Roxbury and the abandoned Jewish Temples…  home visits for the kids…the families smoking pot and doing lines..There was a restaurant I used to frequent, the Peter Pan on Beacon Street–big cafeteria style food, poetry readings, Jim and I sat near the steam table, our words floated on the mist of steamed cabbage– and I was habitually at the Kebab and Curry right down the block…sitar and sag . I used to see Richard Yates  (Revolutionary Road”)  a drunken shamble down the block, and I had the same Chinese laundry ( I always lost my ticket..he was irate Why you lose ticket!!) as the late radio personality David Brudnoy–loved his show. I remember … working as a clerk at the corner of Newbury and Beacon Street–  (Sunny Corner Farms) “The Cars” used to come in there regularly,  Rick so sky high..fingering a Twinkie.. also remember meeting Gildna Radner, Barney Frank, and Howard Zinn on the night shift. And beers after work at Frankenstein’s. My boss after–a fat Irish man called me a dirty kike regularly after he had a few…nice to me the next day… I remember the ancient gay security guard ( Maynard) who used to come in to chat–and always told me of stories of how young men were enamored with him–and yes the “toothless whore” who told me she only gives “head” to her ” man” her point of honor. I remember during a snow storm I gave shelter to the street icon ” Mr. Butch” and almost left him there overnight…Oh yes the Victor Hugo bookshop–what a joint– cloistered myself with used and rare..and the Newbury Steakhouse–remember the chef– a real card–dirty jokes and hard-earned wisdom–we used to shoot the shit..even had a sort of girlfriend–well–I later learned she was community property–if you know what I mean–I remember sitting on the stoop of my brownstone on a hot summer night, and people would stop and chat and shoot the summer breeze–I remember being dead drunk and asking the drunks sleeping on the grates of the Boston Public Library what the meaning of life was…They told me to f-off. I remember the thick hash and eggs I had every morning for breakfast– how the eggs would bleed every morning on that mound–and Malaba–the Zimbabwe  man on the night shift at McLean –called it hashish browns -would be dead if I continued that habit. I remember writing in my furnished room–with my hot plate and thinking I was a Beat poet or something–mice scurrying by–my father told me” get the hell out of there,” My mother joined in ” That’s the life style they live, Larry…”  Hordes of us made pilgrimages to be with the rodents and roaches.. remember all night poker games with the service bartender, who worked at the Hilton. He was going back to U/Mass for years to finish his degree.. for the past 5 years.

Oh–that distinct flushed out smell of Father’s Five–tattooed- Hell’s Angels, ready to bounce you at the door–the Citgo sign flashing in the canyon of Kenmore Square…direction, an elixir for your fog–vinyls at Loony Tunes–the old ladies in Coolidge Corner who brought you their dead husbands’ shirts when you manned the counter–“this should fit you they crooned–“-and you would be a walking monument to the deceased. Cutting through the alleys in the Back Bay– a buffet in the trash bins for the down and out–they delicately picked at the remains of the day–sewage and rot behind a tony shop– it was always Doomsday in the Commons–street preachers at a clearance sale—street singers–sing for change and begged for it–the old Italian guy who yelled at you: “Hey kid–ripe tomatoes–bring some for ya tomato”–laughing–the stub of a cigar shaking outside his mouth… the Mass. ave bridge gave your life a horizon–open space from the small furnished room– a city on a hill–Buzzy’s roast-beef–in front of the Charles Street Jail —a knish–delish–hotdog , —  oh,red phallus of beef, melts in my teeth– .  Karen–the Jewish girl in the North End–you lived and learned to love and leave–Caruso music and the couple that had operatic fights in sync… Her last words before she threw you out “I can’t stand all this eating.” Smell of bread baking all night–corpulent men outside the social club–called you twinkle toes, as you jogged by with chicken legs.  Your friend– a clerk–dating a dwarf–an adjunct at B.C.–American Studies–small love affair–

Lived on Park Drive–sounds fancy–  but overlooked  the subway tracks and the vast Sears warehouse– the roar of the subway, the gray, looming Sears trucks in the distance–the trickle of the Muddy River–My window open–forgot I was nude, catcalls from the subway platform at my flabby body–bloated from the 11 to 7 shift, sitting watching the restraints– on patients– rise and fall slightly with their sedated breath–so many chests inflated, deflated…defeated. The croissants from the Savoy Baker in Audbon Circle were flaky concessions, the dark beers and dark cavernous bar at Brown’s my balm. And the elevated tracks on Harrison avenue–elevated me–I was a transcendent blur crosstown… the Dudley Bus idling near the vacant lot, rats as big as cats foraging near a fence. Sometimes I met her at the Nickelodeon,…was it the Kiss of the Spiderman…? Held her hand…traced it the way I would her body later in her studio– a rail thin graphic artist from Providence–she wrote me beautiful letters, that made me swoon in my room. 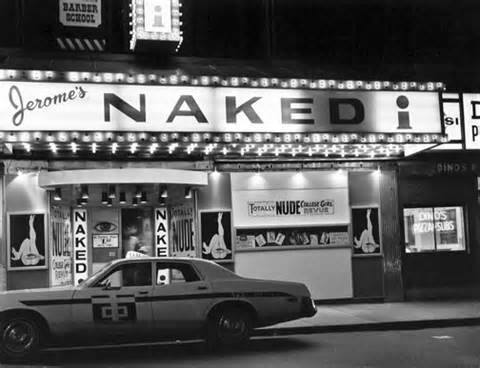 The Greyhound Station was near a RockaBilly bar–the flashing, seductive light of the Playboy Club, hawked long legs and short resumes–there I weaved my way to the carnality of the Combat Zone–down La Grange Street, first stopping by Hand the Hatter, an avuncular old man–some fish–some fish out of order–in the midst of all this–presided over blocked, buffed and august fedoras–the kind my father wore, his heels pounding the floor in Penn Station. And the whore in the bar said ” Give this kid a glass of milk.” And all my street-wise posturing melted with these succinct words–not a boilermaker man but a milk boy.

In the old wing of the Boston Public Library Bacchante and Baby met me–lifting her child with joy–I wondered if my mother ever did that with me? A bust of Henry James stared at me in Bates Hall, as I made my way to the Periodical Room–scrolls of newspapers– old men–half-glasses, canes,wondering why that man was praying over an Anchorage Times–the room smelled like sweat, vaguely urinous–reading a rag– a waiting room for death…

-Doug Holder is a Boston Poet and publishes the widely read Boston Small Press and Poetry Scene Blog. He is the publisher of Ibbetson Books, hosts a community access show in Somerville, Mass. among the many activities he engages in the good name of poetry. http://dougholder.blogspot.com/