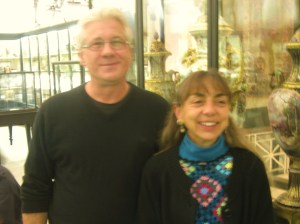 Just before Hurricane Sandy meets up with two cold fronts and travels up the Delaware Bay the calming poetic voices of David Kozinski and Michele Belloumini stirred the crowd in the 2nd floor gallery of Ryerss Museum and Library.

We thank everyone who has supported the reading series this year and look forward to our first reading of 2013 with Lester Mobley and Bruce Kramer on the last Sunday of January 2013.

Our next event: November 10th-  The Tenth Muse Workshop with Diane Sahms-Guarnieri

The Fox Chase Reading Series presents our featured poet/writers reading on October 28th @ 2pm featuring the poetry of Michele Belluomini and David Kozinski at Ryerss Museum and Library, 7370 Central Avenue, Philadelphia, Pa. 19111. The Featured Poets will be followed by an open mic.

Michelle A. Belluomini is a poet, storyteller and librarian. Her work has been published in journals such as The Mad Poets Review, Poetry Motel, American Writing, APR: Philly Edition, and most recently in the anthology COMMONWEALTH: Contemporary Poets on Pennsylvania. Her chapbook, Crazy Mary & Others won the 2004 Plan B Press Poetry competition. You can read the poetry of Michele A. Belluomini in The Fox Chase Review at these links:2008 WS; 2009 WS; 2009 AW

David P. Kozinski won the 7th Annual Dogfish Head Poetry Prize for his chapbook,Loopholes, published by the Broadkill Press. He has been nominated for the Pushcart Prize by the editors of the Schuylkill Valley Journal and the Mad Poets Review. He received the Dr. Eugene J. Szatkowski Achievement Award from the Americans of Polish Descent Cultural Society (AMPOL) for his poetry and visual art. You can read the poetry of David Kozinski in The Fox Chase Review at this link: http://www.foxchasereview.org/12WS/DavidPKozinski.html

A warm autumn breeze cascaded across Fox Chase as the words of Michele Belluomini and Thomas Devaney floated about the small cafe to kick off the Fall Season of The Fox Chase Reading Series at 3 Sisters Corner Café in Fox Chase. The open mic was outstanding. You can view photographs of the event at this link: http://www.flickr.com/photos/12065560@N04/sets/72157614581079088/

Next Up: Mike Cohen and Hanoch Guy on October 23rd!

Learn more about our featured poets on September 25th: