Mundane, My Muse by Sunil Sharma 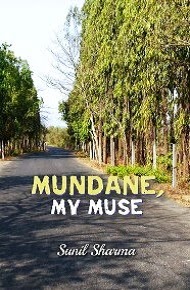 Mundane life has charm and massive ennui too; and a man ought to find meaning even in tedium, and it is precisely what the poet confirms. Sunil’s lyrics speak emotively of routine incidents he gathers. He notices everything, collects tiny facets, deliberates in lonely hours and thereafter, gives expression. Mundane, My Muse carries a different pattern if one compares it to his earlier poetic endeavours.
Life, a disturbed collection of experience and impressions, survives in fragmented times without cohesive objective. A City Collage offers glances of bigness in horrible globalized urban living, torments.
.
In these breaking globalised urban realties,
Turning the glittering cities into ghettoes of mind
.
A stressful knowledge appearing soothing visits in A February Afternoon. It is difficult to quantify tenderly multipart joys and sufferings, for human nature and humdrums permit not to understand life’s zeitgeist though man moves in radiant perceptible treats, market-psyche suggests.
.
I cruise through this shadowy
Horizontal painting…
.
Ugly display of urbanity and insensitive contempt in bargaining comforts signal cacophony, and give glimpses in A Supermarket in Mumbai Suburb.  Without obvious gratitude, a man realizes in dazzle of modernity a tragic irony, lives in illusory love that remains unfulfilled, and forgets anguish in vicarious joys with intrinsic guilt.  In highly mechanized system, he seeks joys in superficial gratification and absent present.
Strangely, he is conscious of the agonies of not only city but also looks beyond and therefore, wants the rulers (like other poets) to look beyond metropolis, and asks to abandon political acrobats, and thinks of despair of the poor living in hunger and scarcity. Somewhere, he halts, looks around and finds desolation man has brought in nature, nature that constructs aesthetic prototypes of continuity. A question perturbs why man strips nature of its divine adornment. Human nature wants joys, looks at poverty and scarcity, feels anguished, watches a miserable being and expresses pity but finds no reasonable passage, and therefore, it turns into aching encumbrances. A disheartening passivity haunts certain poems and the bard juxtaposes nature and man’s tiny caustic acts to evaluate empathies absent.
Humanism wakes up and the awful wordy supremacy is noticeable as the lyricist issues a subtle warning in Bring your Words. If he speaks of bristly tribulations of metro life, he touches human relationship gently and wants lasting proximity and warmth and perhaps, the poet tells man of life-giving human bonds even in grudging truths life offers. Relations provide flashes of enduring joys and memories warm. Relations if separated make life barren and animalize it. He pays tribute to daughters, when he says, ‘Little Goddesses /Need to be fiercely /Protected and guarded /By all of us!’
Elsewhere, he observes –
.
Fathers are the guys, who impart real lessons of life,
They look tough but often cry, hiding hot tears…
.
Perhaps, the poet talks of a perennial truth despite apparent dichotomy in feelings, thoughts and the spirit of age, an age grappling for a solid fulcrum. Insensitivity in relations stays on as even mothers fall victims to false and rudimentary contemporary value system where man loses warmth. Even mothers suffer, and inhuman treatment reveals hypocritical approach.
.
And thus cleverly enslaved Mother
An old rheumatic woman,
To the small smelly kitchen
For the remaining of her sad lonely life.
.
Plight of workers and apathetic cities haunt lyrics frequently. He cannot escape comparison between a life of affluence and scarceness, and invokes sympathies of ostensibly powerful people. Women from the elite strata live a highly rich life (?) while a poor woman is archetype of sufferings.
He talks of miseries of workers at construction sites as hopes linger on for filling bellies with the residue of what they earn. Growth and democracy are irrelevant when sufferings assault. (Excluded Ones). Living away from homeland, goads to ventilate woes saturating mindset of people, who stay away and settle down elsewhere to earn living. Immigrants fail in locating solid relations even though they sell perspiration and time.
Tormenting loneliness amidst crowd makes life complex.   He laments at the scornful attitude of artists towards art and life, a naked semblance Lonely. Life is destined to trouble man in visible delight but sickening effects of metros distort and rip apart bonds, and drive man to Silky shadows
A young couple keeps searching love and  understanding in ‘surging crowds’ and pays a long agonized tribute to Love/Living in Indian Metro for man fails to recognize, ‘The contemporary idiom/Of urban/Love and romance’ because rainbow-like dreams of emerging middle class become history unrealized. A middle class life in undefined feelings of miserly and rich life with giggles and groans, is a fact as it hugs and kisses love coldly in an abandoned but swarming metro. Freshness in life of a modern man is a mirage, and a contemptuous scenario scares.
Even in freshness of experiences, one confronts monotony and witnesses end of a dream life in metros.  One notices festive life but feels aghast at the miseries workers and women face in deplorable living conditions. He feels for the downtrodden and laments that freedom did not bring happy change in the life of fellow Indians, notwithstanding awesome growth and material progress. Gaps in living appear glaring and defeat claims of happiness and here ‘stark contrast’ delineates a depressing picture.
Man is responsible for many miseries on earth, for not for a while he restrains greed and exploitation and often invites fury of nature bringing horrific cataclysm. If natural upheavals make life appalling and frightening, man is the offender, for he fails to contain nature’s ferocity despite solemn assertions.
Sunil analyzes insightfully daily experiences about animate and inanimate objects he observes, finds logic and faint unanimity in personal and social regions without philosophizing, and still demonstrates genuine anxiety about life and existence.
.

P C K Prem (p c katoch of Malkher-Garh Palampur, a former civil servant and Member PSC, Himachal), an author of more than forty-five books in English and Hindi, post-graduated in English literature from Punjab University, Chandigarh, has  nine volumes of poetry besides books on criticism.  Katoch Prem is a poet, novelist, short story writer and critic in English from Himachal Pradesh, India.