The Gold Cell By Sharon Olds 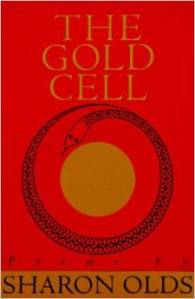 Last week I picked up Olds book, The Gold Cell. Jeez. I was devastated. Her writing is riveting, dense, stark, brave. With titles like, “The Abandoned Newborn,” “The Pope’s Penis,” and “Outside the Operating Room of the Sex-Change Doctor,” she tackles topics not normally taken on by other writers–and if they are, not tackled as well. Her poems are snapshots come to life, with vivid scenes like this:

The young man and I face each other.

His feet are huge, in black sneakers

laced with white in a complex pattern like a

set of intentional scars. We are stuck on

opposite sides of the car, a couple of

molecules stuck in a rod of light

rapidly moving through the darkness. He has

or my white eye imagines he has the

casual cold look of a mugger.

The collection is nicely organized, starting with the narrator’s childhood and passing through her adolescence into adulthood. She observes her parents aging and watches her children grow. She is graphic and real, and withholds no feelings or character description even if it is taboo. When Olds covers topics written by a million other poets—first kiss, first love, first sex, alcoholic father, anorexic mother, and abandonment—She handles them deftly and newly. Most writers can only dream of being the same caliber as Olds.

SM Page is from Michigan. He has Shawnee-Chickasaw genes from one side of his family tree, and Apache-Mexican from the other side.  He is the author of The Timbre of Sand and Still Dandelions. He holds two AA’s from Palomar College, a BA from Columbia University and an MFA from Bennington College. His critical essays have appeared regularly in the Buenos Aires Herald and the Fox Chase Review. He is the recipient of The Jess Cloud Memorial Prize, a Writer-in-Residence from the Montana Artists Refuge, a Full Fellowship from the Vermont Studio Center, an Imagination Grant from Cleveland State University, and an Arvon Foundation Ltd. Grant. He loves his wife, family, friends, travel, and adventure.