Category Archives: poets in the park

Our blog has been widely read, full of  book reviews, essays, poetry and literary news, interviews of poets and writers as well as area news. . We thank all those who contributed to the blog. The main focus of the review, reading series and blog has always been to promote poets and writers and we believe we have achieved this goal.

We now look forward to new challenges and goals, using more of our time to create and explore the craft.

To view past issues of The Fox Chase Review please click on the links under the Masthead.

Thanks to all the poets and writers who contributed, the great editorial staff, and occasional hosts of the readings series who kept FCR going. 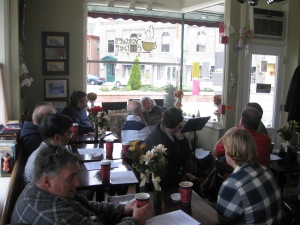 Poets In The Park – Lions Park

Poets on the Porch @ Ryerss Museum and Library

We leave you with these wise words for all poets and writers to follow:

“Be what you are. Give what is yours to give. Have style. Dare.” – Stanley Kunitz

Philly Poetry Day was slated to kick off at 12:00 am in West Philly with over 30 events scheduled across the city, Delaware and Bucks Counties. Philadelphia is home to a diverse group of poets mirroring the arts scene across the city. Realism, Language, Spoken Word, Mathematical, Haiku, Confessional, Formal, Concrete, Dada, Modernist, Post-Modernist, Avant-Garde, call it what you want but in Philadelphia this day words flowed forth from porches, coffee houses, in front of buildings, parks, studios, on Septa buses, town halls and colleges, on street corners and backyard barbeques . We at the Fox Chase Review and Reading Series have a fondness for the parks in Philadelphia. Our Poets @ Pennypack was planned over six months ago and fell on Philly Poetry Day. We decided to add two informal events to the day. Diane Sahms-Guarnieri and I slated a reading in Lions Park in Fox Chase because that it is where it all started, the idea for the review and reading series. We also slated a reading at Gorgas Park in Roxborough where Diane graduated from the adjacent Roxborough High School and grew up just a block away where the elders of her family still reside.

Our day began at Lions Park for an 11 am reading centered on reading our poetry about Philadelphia’s people and places. We enjoyed reading in Lions Park to the folks waiting on the 18 bus in the loop. 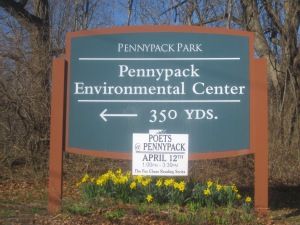 Following the Lions Park reading in Fox Chase we traveled down Rhawn Street to Verree Road and the amphitheater located to the rear of the Pennypack Environmental Center. This rustic setting set on a ridge high above the Valley of the Pennypack  in the Northeast was perfect for a poetry reading. The reading began at 1 pm with our featured poets.  B.E. Kahn, Peter Krok, Tom Mallouk, Bruce Kramer, Wendy Schermer, Diane Sahms-Guarnieri and J.C. Todd delighted the crowd with full 15-20 minute sets of poetry. The following poets participated in the open mic following the features: Mike Cohen and Rodger Lowenthal

After a brief rest we traveled south on the Boulevard to the Fox street exit and down Henry to Leverington Avenue arriving at Gorgas Park which rests on Ridge Avenue. At 7 pm we completed the day much as we started, on reading our poetry about Philadelphia’s people and places. We were met by the elders of Diane’s family and a few neighborhood kids and enjoyed reading in Gorgas Park.

Philadelphia is blessed with possibly the most beautiful park system in the country. From the expansive Pennypack Park to neighborhood parks like Lions Park and Gorgas Park. The poet Joseph Brodsky once said, “Poetry must be available to the public in far greater volume than it is.”  On this day, the 12th of April 2014 in Philadelphia, on Philly Poetry Day in over 30 venues, poetry was available in abundance.   Photographs from our events are available at these links: Philly Poetry Day : https://www.flickr.com/photos/12065560@N04/sets/72157643749178684/ Poets @ Pennypack: https://www.flickr.com/photos/12065560@N04/sets/72157643749179114/   For other reports from across the city  please visit: http://www.phillypoetryday.com/

More poetry? On April 27th @ 2 pm Dan Maguire and Ann E. Michael are reading at our Featured Poets/Writers Series at Ryerss Museum and Library. More information on this reading can be found at this link: https://foxchasereview.wordpress.com/2014/04/01/michael-and-maguire-april-27th/ 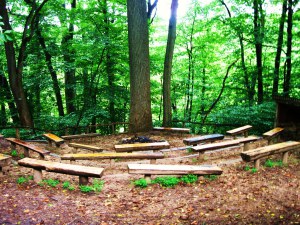 We also have two informal readings before the Pennypack reading and after featuring Diane Sahms-Guarnieri and g emil reutter. http://gereutter.wordpress.com/about/    http://dianesahmsguarnieri.wordpress.com/

We hope you can find the time to come out to Pennypack or visit one of the informal readings. You can check out other Philly Poetry Day events by visiting their website: http://www.phillypoetryday.com/

The Fox Chase Reading Series is pleased to present the first installment of Poets @ Pennypack on April 12, 2014: 1 pm to 3:30 pm – Amphitheater/Camp Fire area at the Pennypack Environmental Center, 8600-A Verree Rd, Philadlephia, Pa. The featured poets will be followed by an open reading.

B.E. Kahn – B.E. Kahn, a native Philadelphian, now lives in Wynnewood, Pennsylvania. She is a recipient of Pennsylvania Council of the Arts and Pew Grants. She was awarded First Prize for Poetry at the Philadelphia Writers Conference and some of her other awards include The Lotus Bloom Journal and The Missouri State Poetry Prize. You can read the poetry of B.E. Kahn in The Fox Chase Review at this link: http://www.foxchasereview.org/10AW/BEKahn.html

Wendy Schermer – Wendy Schermer was born in Detroit, grew up in Philadelphia, and is now a resident of Arden, Deleware, where she has lived for the past eight years. Wendy shares her home with a dog and two cats who have been steadfast companions since her two sons became adults and made lives of their own in Philadelphia and Brooklyn, respectively. Although Wendy works full-time for the State of New Jersey’s Judiciary, her real love is writing. You can read the poetry of Wendy Schermer in The Fox Chase Review at these links: http://www.foxchasereview.org/13AW/Schermer.html and http://www.foxchasereview.org/12AW/WendySchermer.html

Bruce Kramer – Bruce Kramer is a writer from South Jersey. Most of his work has appeared in boring technical documents, medical publications, and marketing propaganda, but he has also been published in the occasional magazine and literary publication. He believes in cold beer, rock and roll, and baseball. He sometimes acts like he is named after Bruce Springsteen, but he knows he is named after somebody much cooler. He has poetry forthcoming from Barrelhouse Magazine and you can read his poetry in the Fox Chase Review at this link: http://www.foxchasereview.org/11June/BruceKramer.html

Peter Krok – Peter Krok is the editor of the Schuylkill Valley Journal and serves as the humanities/poetry director of the Manayunk Art Center where he has coordinated a literary series since 1990. Because of his identification with row house and red brick Philadelphia, he is often referred to as “the red brick poet.” His poems have appeared in the Yearbook of American Poetry, America, Mid-America Poetry Review, Midwest Quarterly, Poet Lore, Potomac Review, Blue Unicorn and numerous other print and on-line journals. In 2005 his poem “10 PM At a Philadelphia Recreation Center” was included in Common Wealth: Contemporary Poets on Pennsylvania (published by Penn State University). His book, Looking For An Eye, was published by Foothills Press in 2007. You can read the poetry of Peter Krok in The Fox Chase Review at these links: http://www.foxchasereview.org/09AW/16-PKrok.html

Tom Mallouk  – Tom Mallouk’s work has appeared in a number of literary journals, including GW Review, The Pisgah Review, The Quercus Review, Red Rock Review, US 1 Worksheets, The Schuykyll Valley Journal and The Sun. His book, Nantucket Revisited, was published in May, 2013. He has been a psychotherapist for many years and resides in Doylestown Pennsylvania with his family. You can read the poetry of Tom Mallouck in The Fox Chase Review at this link: http://www.thefoxchasereview.org/w14tmallouk.html

Diane Sahms-Guarnieri – Diane Sahms Guarnieri is a Philadelphia Poet and Poetry Editor of The Fox Chase Review and co-curates The Fox Chase Reading Series. Her first collection Images of Being was released in October of 2011. She was awarded a grant in poetry from the AEV Foundation in May of 2013 and currently serves as Poet in Residence at Ryerss Museum and Library in Philadelphia. . Diane’s poetry has been published widely in the small and electronic press. You can visit her at http://dianesahmsguarnieri.wordpress.com/  and http://www.dianesahms-guarnieri.com/  On Youtube:  http://www.youtube.com/watch?v=x9oJuy6i2gw

Looking Back in Photographs- Moving Forward

As we move forward with The Fox Chase Reading Series in 2012 we thought we could take the time to look back over the last five years in photographs. We hope you enjoy the view. 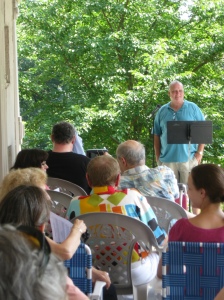 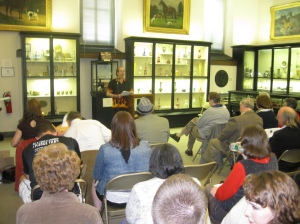 Featured Poets and Writers Series at Ryerss Museum and Library 2012-

Poets in the Park 2011- A Great Evening of Poetry 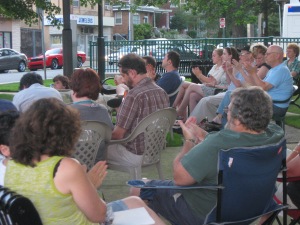 Tonight: Poets in the Park

A mild summer breeze will be cascading across Lions Park tonight for the 2nd annual Poets in the Park 2011. Come on out and enjoy an evening of poetry in heart of Fox Chase, 7900 Oxford Avenue.  The program will run from 7:30pm to about 9:30pm. Grab a bench, bring a lawn chair, or blanket and relax at this free event.  Poets in the Park 2011 – July 16th